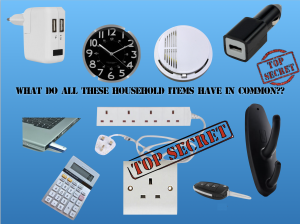 (A. They are all legally available on the internet and contain audio and video recording facilities some even call you due to motion sensors)

“Are You Being Bugged?”

Am I at Risk From Being Bugged?

A quick answer to this is YES!

The question is who would want to or stand to gain from going to the trouble and expense of doing it?

Political & public figures, people engaged in fringe & extremist groups, those cheating on their partner, persons engaged in research & development especially in the IT field, higher management personnel in competitive companies. The list is endless.

Do you know
-A simple modification to your telephone handset can leave the microphone connected all the time allowing anyone to listen in to all conversations in the room.
-A telephone transmitter or recorder which transmits or records all of your telephone conversations may be installed in the phone, the socket or junction box, anywhere on the line, as far back or even inside the exchange.
-A bug may be installed without entering your premises.
-A wall contact microphone can pick up conversations through up to 30 cm of concrete.
-A socket or light switch may be replaced with an identical unit that contains a built in transmitter or SD card recorder, powered by the mains.
-Speech in a room causes a small vibration on the window, which can be detected and converted to audio, by a laser beam, from some distance away.
-A computer screen radiates a signal (try putting a radio at the side of it), this radiation leaks out of windows and can be received by a special receiver which could then show you whatever the screen was displaying.
Software is available for phones using the Android operating system that record all room and telephone conversations, the recordings are then send by the phones internet connection to a server where the person who has installed it can listen to the recordings on their PC. Copies of text messages mails and many other communications are also sent to the server.

Some Indications That You May Be a Victim Of Bugging

-Confidential information seems to be getting out to competitors
-Competitors seem to be just one step ahead all the time
-Your home or premises have been broken into and very little or nothing was taken
-Sockets or switches show signs of being moved slightly, i.e.: the wallpaper may be disturbed.
-Various vehicles parked near to your premises, that appear to be empty
-You hear unusual sounds (crackling, clicks, volume changes) on your telephone handset
-Indications that your handset may have been exchanged, i.e.: numbers in memory may be lost
-Repairers or unknown companies turn up to carry out work when they have not been called
-Furniture or items appear to have been disturbed
-Interference on your radio or television
– A odd texture on small parts of wall, floor or skirting boards, this may indicate the use of conductive paint from a hidden microphone.
-Unexplained brick or plaster dust on floor, or a small discoloration showing on the wall, this may indicate drilling from the other side of the wall or plaster, paper being lifted to plant a microphone.

What Should I do?
If you suspect you are a victim of bugging, the first thing to decide is, do you want to alert the opposition that you suspect this, as sometimes, once you are aware of it you can use the fact to your advantage by a campaign of misinformation. Other things to take into consideration are that once the electronic spy is alerted, they may take steps to make detection more difficult. i.e.: temporary removal etc.

The most important part of any check is the visual inspection this when carried out correctly can take many hours, as each room has to be checked inch by inch. Also, all socket outlet, light switches, vent grills are to be removed. It is often wise to purchase a set of these items giving you something as a comparison with the ones which you remove.

Other items which you may find more difficult to check and are very popular systems for the electronic spy these are fire and intruder alarm units and they may use the existing alarm wiring to pass the signal back to the control unit which may conceal a transmitter or recorder in its circuitry. When inspecting the outside of the premises be on the lookout for any newly replaced mortar or any signs of drilling etc. the same goes for inside, and a careful examination of plaster work and skirting boards is required, as often a slight discoloration is caused when a microphone is placed just below the surface or a fine layer of conductive paint may have been used to carry power/signals to a hidden device.

The first and foremost thing to check is the telephone system. Probably the easiest and safest way to deal with the handset is to replace it with a new one unless you have the know-how to test it yourself. The socket & junction boxes are best checked by acquiring identical units and comparing the circuits visually. Companies such as BT will carry out a line check for free if you report it as a faulty line (remember to make any calls that may alert the person eavesdropping from another phone, away from the premises), this line test shows up many of the line abnormalities caused by parasitic & line activated telephone transmitters/recorders. A line voltage check with the handset off the hook will often show up series connected devices. Apart from a visual inspection of the line as far back as possible and a check for RF transmissions (see below) with the handset on & off the hook, there is little more the individual can do without seeking professional assistance.

The information contained here is not a comprehensive guide to counter surveillance, as this would be well beyond the scope of most none professionals. To put it simply, if a surveillance device has been planted by the security services i.e.: MI5 the chances of the untrained person detecting it would be very slim. The term untrained person includes a large proportion of private investigators, who claim to be experts in this field. 😉

What Our Clients Say About Us!

QUOTE OF THE WEEK
Scroll to top