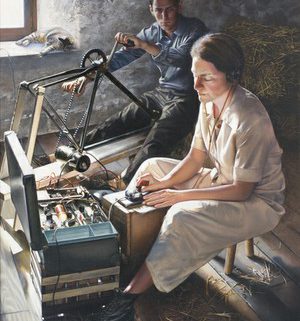 “She is the most dangerous of all Allied spies. We must find and destroy her.” 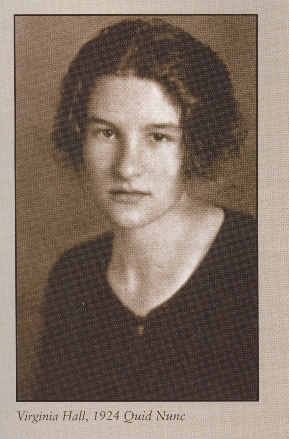 One of the greatest spies in American history, Virginia Hall was a 20 year veteran of the OSS and CIA who willingly operated deep behind enemy lines even after her face was plastered on every wanted poster in occupied Germany.  While her fellow resistance fighters and associates were being tortured to death, shot in the streets, or impaled on goddamn meat hooks (literally), this hardcore, stone-cold deep cover operative was picking her way through the countryside of occupied France with a Colt .45 and a full communications suite concealed in an ordinary-looking suitcase, looking for the next good spot to set up shop and broadcast German operations plans to Allied command in London.  She coordinated air drops of weapons, cash, and reinforcements for French Resistance agents, recruited and trained guerilla fighters, blew up bridges, derailed trains, sabotaged German installations, gathered intelligence on troop positions, and reported all of her findings back to Allied HQ.  When she was done with that, she spent fifteen years working behind the Iron Curtain assisting CIA-backed resistance against the dang Soviet Union at the height of the Cold War.  She was made a member of the Order of the British Empire and the only woman to receive the Distinguished Service Cross (America’s second highest medal for bravery) during WWII, and turned down dozens of other honors because she didn’t want to compromise her anonymity so she could keep doing undercover operations for the CIA.

Oh, right – and she did it all with a wooden leg she named ‘Cuthbert’. 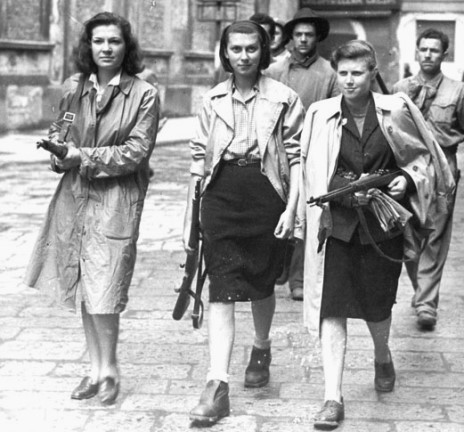 At one point, while fleeing the Gestapo for 30 miles through the goddamn Pyrenees Mountains, she reported in that ‘Cuthbert’ was giving her some trouble and making it a little difficult for her to rappel away from Nazi machine guns.  The SOE office in London, not realizing that Cuthbert was actually an inanimate object required for her survival, responded with the following message:

“If Cuthbert is giving you difficulty, have him eliminated.”

Virginia Hall was born in Baltimore, Maryland in 1906.  She attended school at Radcliffe and Barnard College, then went off to study abroad in Europe.  She attended schools in France, Germany, and Austria, learned German and French fluently, and eventually worked in the American consulates in Venice, Warsaw, and Turkey.  Her ultimate goal was to be a Foreign Service officer, but during a horrific hunting accident in Turkey she ended up taking a bullet in the leg and wasn’t able to get to the hospital before the gangrene started to set in.  The 27 year-old Miss Hall had to have her left leg amputated just below the knee and was fitted for the prosthetic.

Well, back in these days you weren’t allowed to be a Foreign Services Officer if you were missing a piece of your leg, so Virginia Hall decided it was time for a career change.  She’d seen some of the horrible stuff going down in Italy, Germany, and Poland recently, and decided that whatever was going to happen, she wanted to be damn sure she could help out in the fight against Fascism wherever it could be found.  She traveled to Paris and enlisted in the French Ambulance Corps as a Private, hoping to help by driving hospital trucks, carrying stretchers, or tending to the wounded.

Unfortunately, the Battle of France lasted about ten days, and with Paris under siege there wasn’t a hell of a lot for her to do in the opening days of WWII except get the hell out of town as quickly as possible.

Hall escaped to London and pledged her aid to a newly-formed spy agency called the Special Operations Executive (SOE).  Knowing full well that she would be tortured and executed if caught as a spy, Virginia Hall volunteered to go back into occupied Europe to try and organize resistance to the Nazis and report in to the British about what was going on behind the Atlantic Wall.  The first female operative in the SOE, Virginia Hall crossed the Channel in the middle of the night, deployed to France by torpedo boat, made her way to Lyon, and spent a year and a half posing as an American reporter for the New York Times.  Under the guise of “chasing down leads”, she toured German installations, helped downed UK pilots and French POWs escape, sabotaged Nazi operations, and sent coded messages back to London describing exactly what the heck was going on in occupied France.

Once the United States joined World War II things got a little tougher for her, and before long the Gestapo spy-hunters were closing in on her.  Some of her associates were executed, she had to go undercover with a fake ID, and eventually the Nazis put out an order to have La Dame Qui Boite (“The Limping Lady”) brought in for the kind of “questioning” that people don’t usually manage to survive.

She had to get the hell out of France… again. 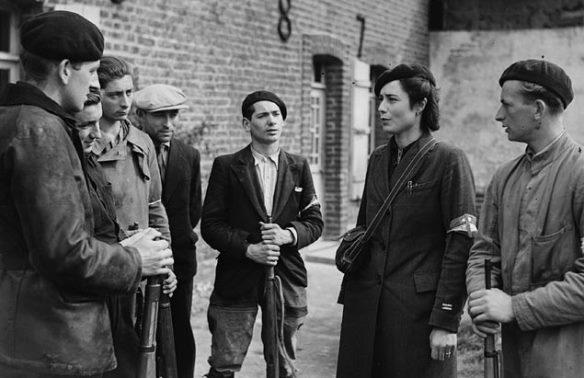 Hall traveled by train out of Lyon, jumped from the train before arriving at her destination (no easy feat with a strap-on leg) then went on foot for over 30 miles through the Pyrenees Mountains into Spain.  After multiple harrowing escapes and close calls, Hall arrived in Spain, where she was promptly arrested for trying to enter the country without the appropriate paperwork.  She spent six weeks in a Fascist prison before the SOE was finally able to negotiate her release.

After busting out of Franco’s prison, Hall was assigned to stay in Spain, continue sending reports, and coordinate the return of escaped pilots from Spain back to England.  After about four months of this bullshit, Virginia Hall really started to miss the good old days when she would spend her Tuesday evenings staring down the barrel of a Walther P38.  She would later write, “I thought I could help in Spain, but I’m not doing a job… I am living pleasantly and wasting time. It isn’t worthwhile and after all, my neck is my own. If I am willing to get a crick in it, I think that’s my prerogative.”

It was time to go back into France.

First, Hall went back to London, where she received the Order of the British Empire from King George himself.  She was trained in radio work, and transferred over to the Office of Strategic Services (OSS) – the precursor to the modern Central Intelligence Agency.  Already a highly-wanted special operative marked for death by the Gestapo, Hall volunteered to infiltrate back into France to organize the Resistance and prep France for the Allied invasion at D-Day.  In 1943 she dyed her hair white, changed her appearance, hopped onto a British PT boat, and once again snuck back into occupied France. 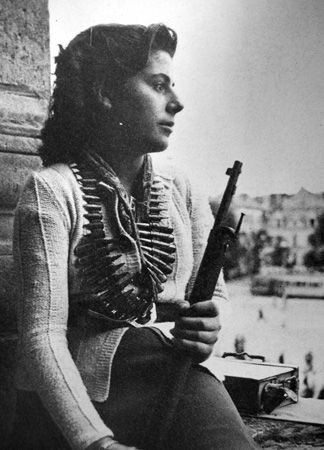 For the next year or so, Virginia Hall coordinated parachute drops of supplies, weapons, and money for the Resistance.  She made contacts with local resistance leaders, set up safe houses, rescued downed pilots, and trained and equipped three battalions of Resistance fighters to battle the German occupation.  Moving throughout the Haute-Loire region with a sidearm and a radio concealed in a suitcase, she would set up in barns, attics, and safe houses to broadcast missions reports and intel back to London.  These radio broadcasts were something that could be traced by the Gestapo, so after setting up and broadcasting, she then needed to immediately pack up and get the hell out of there before the SS showed up to permanently shut down her operations.

From 1943 until the liberation of France in 1944, Virginia Hall and her Resistance fighters are credited with destroying four bridges, cutting multiple rail lines, derailing dozens of freight trains, killing 150 German soldiers, and capturing another 300 enemy troops.  She also somehow found time to hook up with a French dude, OSS operative Paul Goillot, and the two would be married at the end of the war.  The couple actually heard the news while they were undertaking final preparations for a parachute insertion into Austria for a classified sabotage mission behind enemy lines.

For her actions during the war, Virginia Hall received the Distinguished Service Cross – an award for bravery that is second only to the Medal of Honor.  The director of the new CIA wanted to have a big ceremony for her, but Hall declined, saying that any fame she received would only make her job as a spy that much more difficult.  She worked as an intelligence analyst in France for the CIA from 1951 to 1966, working against the Russians during the height of the Cold War.  The details of most of her operations from this time are still classified.

Virginia Hall retired at the age of 60 after over 30 years of service as a badass James Bond style spy.  She’d spent almost her entire career as a wanted woman, but retired to a quiet, peaceful life on a farm outside Baltimore at the age of 60.  She lived to be 78 years old, passing away on Bastille Day 1982.

She remains the most highly-decorated and most badass spy in American history. 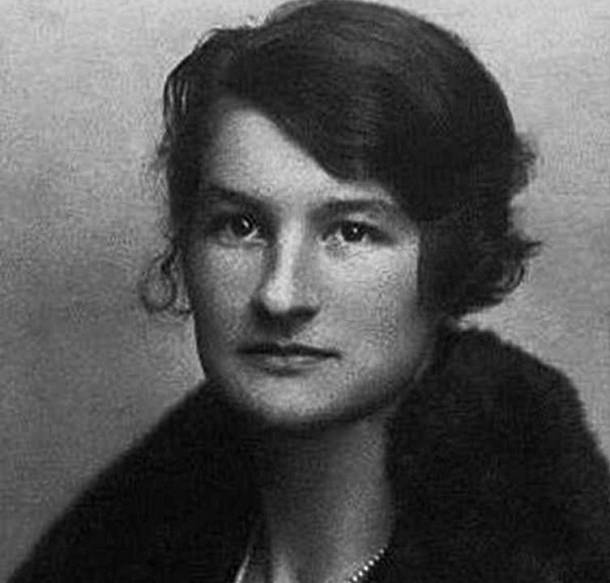 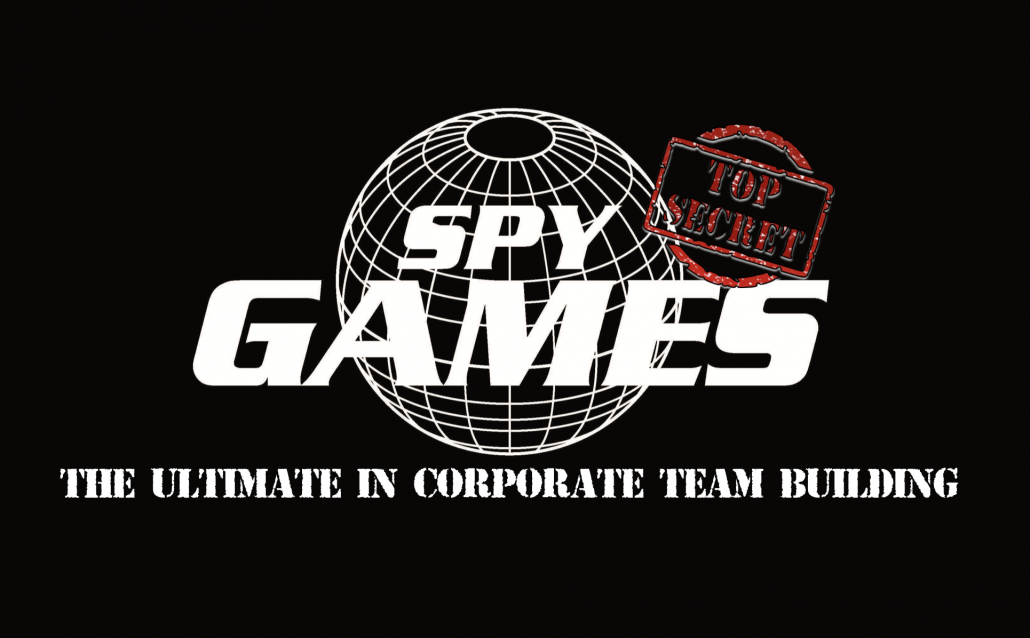 75 years since The Great Escape!