Reveal sends senior features writer, Sarah Whiteley, to spy school, where she discovers there’s a lot more to discovering covert information than a pair of high heels and a tight dress

“Taking a sip of wine, I scan the bar and, catching sight of a couple of good-looking guys in their early 30s, I nudge the girl sitting next to me.

‘What about them?’ I murmur discreetly. As they glance over, we both smile invitingly (or at least we hope it’s invitingly, rather than manically) and decide to make our move.

But we aren’t planning on chatting these men up. Not in the traditional sense, anyway. No, our mission is much more stealthy. We are after information – and detailed information at that.

Because my new friend Janine and I just met this morning at spy school, where we were introduced to the tricks of the secretive trade. We heard all about tracking and listening devices from ex-SAS soldier Dave Thomas, who runs his own security and investigation company.

Dave is full of tales of his undercover exploits in Berlin during the Cold War in the 1980s, which is also the setting for the new critically acclaimed TV series The Americans.

But to be honest, what I really wanted to know more about was honeytrapping – the saucy service which women stereotypically use to test their men’s fidelity. But right from the off, I discover I’ve got a lot to learn.

“It’s best to think about honeytrapping as a way of getting information from people – whether that is if they’re willing to cheat on their partner or something completely different,” Dave tells us. “Some people who use honeytrappers aren’t wanting to find out if their other half is faithful – it can also be to find out if they have a drink or drug problem.”

And Dave has more myths to dispel. It isn’t just a one-night thing. It can take weeks or even months to find out the information that the client wants. And despite the advent of social media making it easier than ever to keep tracks on your loved ones, there’s still a market out there for honeytrappers.

But spy school isn’t just about theory. After Dave’s talk, we’re sent to a bar for the practical side of our lesson.

We have one hour to fulfil a list of information we need to get from someone in the bar – and it’s not short. We need their full name, date of birth, phone number, marital status, whether they have children or pets… my mind boggles.

Janine and I decide to team up and, over a glass of wine, we work out our cover story. Deciding to put our northern accents to good use, we agree to pose as tourists in London just for the day, to see if we can start a conversation that way.

The first targets we spot are two men in their 30s at the table behind ours. We make our approach and, despite looking initially wary, they do give us some pointers on where we can go for lunch.

However, that’s not what we need to know and, as we try to turn the conversation round to more personal matters, they clam up. We find out they’re from Hemel Hempstead, work in telecommunications and are called James and Martin. That’s it. Not even a surname, let alone their favourite place (yes, that was on the list too).

Discouraged, we skulk back to our table. Aware that time is ticking we decide to move on. To the barman. Bad idea. He barely has time to tell us about his Swedish girlfriend who he met while working before he has to leave to serve an impatient customer.

Our final attempt was two older gentlemen, who one of the lurking photographers tipped us off about. They were the most elusive of all.

We ended up trying to guess their jobs but all we could find out was that it enabled them to have a liquid lunch on a Thursday afternoon and eat at the best fish restaurant in Soho regularly.

So we leave the bar knowing only one thing for sure. We’re the world’s worst honeytrappers!”

HMS Belfast played a key role in the infamous British naval blockade against Germany during the Second World War. During the ship’s deployment in the British Navy spanning three decades, Navy personnel would have formulated state-of-the-art lifesaving, intelligence plans in undercover surveillance, code breaking and bomb deactivation. It seems only suitable that brand new team-building and hospitality packages have been launched aboard the historic warship on the River Thames. 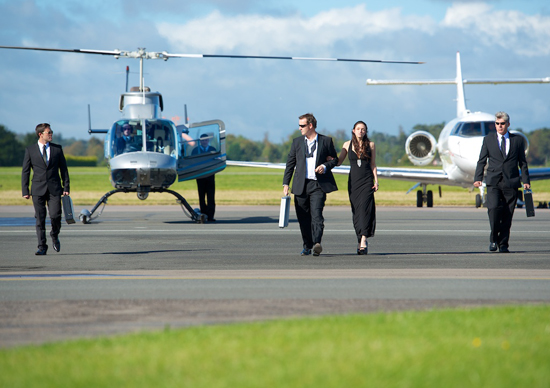 HMS Belfast offers a unique event space to launch its new ‘Spy Games’ packages in an authentic environment. The venue offers great versatility alongside an exclusive historic experience, and can accommodate from 10 to 200 guests, allowing for you to tailor your colleagues’ experience and match their preferences.

HMS Belfast have three packages on offer, each with a different theme and method of extracting the best from your team; the ‘Code Cracking Dinner Party’ from £31.50 per person (min 20 people) will present an exciting and energetic addition to your dinner party on board this famous landmark. Initially a locked briefcase is given to each team and they need to crack the code to open the case. Once inside a number of paper-based observational challenges will test their knowledge and skills. After dessert a representative, or possibly the whole table, are invited to the stage to take part in the head to head pistol draw competition. The fastest quick draw will then earn the champions award and receive the cash prize for their team. Additional WOW factors such as a stunt fight or room burst to snatch a hostage can also be added to really get things going!

The second package is to undertake a ‘Top Secret Mission on a Ship’ for £55 per person (group size: 10 to 200). Armed with a digital camera, HMS Belfast dollars, a unique password and a mission pack, your team will begin a series of intelligence gathering tasks and assignments on board. Tasks will involve meeting with undercover agents to receive further intelligence, gathering clues from various locations and carrying out code breaking challenges to receive cash rewards.

The third is ‘The Captain’s Challenge’ from £55 per person. With groups of 10 to 200 and lasting three hours, this challenge is for corporate clients looking for a team-building event on-board HMS Belfast. A range of activities can be chosen to meet any brief incorporating common business objectives such as leadership, problem solving and communication; these include a series of cerebral, analytical and logistical challenges. Code breaking, dodging lasers or negotiating the minefield – teams are in competition, with scoring achieved by the award of the HMS Belfast dollar.